The BlueROV2 is the world’s most affordable high-performance ROV. With a 6-thruster vectored configuration, open-source electronics and software, and plenty of expandability, it’s the perfect ROV for inspections, research, and adventuring. The BlueROV2 comes partially assembled and requires 6-12 hours of user assembly to complete. What will you see?

The BlueROV2 is the world’s most affordable high-performance underwater ROV. With six- and eight-thruster configurations, a number of available accessories, and open source software, it has an unprecedented level of performance, flexibility, and expandability. With several thousand units out in the field, the BlueROV2 is one of the most popular underwater drones on the market!

The BlueROV2 comes partially assembled and requires 6-12 hours of user assembly to complete. During the assembly process, you learn how all of the components of the system work and fit together and it leaves you with the knowledge needed to make upgrades and improvements in the future!

At the front of the ROV is a high definition (1080p, 30fps) wide-angle low-light camera optimized for use on the ROV. It’s mounted to a tilt mechanism so that the pilot can control the camera tilt to look up or down, even when the ROV is level.

The ROV can be configured with two or four dimmable Lumen Lights, providing up to 6,000 lumens to illuminate the ocean depths.

The ROV uses the patented T200 Thrusters in a vectored configuration, providing a high thrust-to-weight ratio and the ability to move precisely in any direction. The ROV comes with six thrusters but is expandable to eight thrusters with the Heavy Configuration Retrofit Kit, providing full six-degree-of-freedom control and feedback stability.

Adjustable gain levels allow the pilot to have precision control at extremely low speeds as well as high power to overcome currents and carry heavy loads.

The BlueROV2 is rated to a depth of 100 meters (330 ft). That rating is limited by a number of factors, including the crush depth of the 4” acrylic watertight enclosure tube, with some safety factor.

Designed like a work class or research class ROV, the BlueROV2 has an open frame that carries the electronics and battery enclosures, thrusters, buoyancy foam, and ballast weights. This simple design is robust and expandable, making it easy to attach accessories such as an ROV gripper or scanning sonar. We have a payload skid available that extends the frame further and allows you to attach much larger payloads. We’ve seen people use this for scientific instruments, pressure washer attachments, additional battery enclosures, and more.

The BlueROV2 is designed to be expanded and modified and many of our users have made more dramatic modifications to suit their particular applications. Replacing the standard frame with a custom frame, you can create just about any underwater robot you can imagine!

The BlueROV2 is controlled by a drone flight controller running the open-source ArduSub subsea vehicle control firmware. As part of the ArduPilot project, it brings to the ROV a vast number of features, capabilities, and an extensive user community.

At the surface, the pilot controls the ROV through a laptop computer and gamepad controller. The open-source QGroundControl application acts as the user interface, providing the live video stream, sensor feedback and information, and the ability to change settings and configuration.

Getting Started with the BlueROV2

The BlueROV2 is designed for both entry-level and advanced ROV users. It comes with everything you need to get in the water except for a few components:

First of all, there are a few configurable options that you’ll have to choose:

Once you’ve got a solid grip on the basics, there are countless ways to expand your BlueROV2! We have a few core accessories:

If you’re looking to customize your ROV even further and add additional sensors, we recommend the following resources:

If you’re looking to customize your ROV even further and add additional sensors, we recommend the following resources: 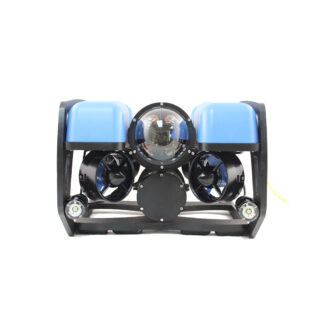 We use Cookies on our website to give you the best experience and to analyze usage and performance. By clicking “OK”, you consent to the use of ALL the cookies.OK