The Ping360 is a mechanical scanning sonar for navigation and imaging. It has a 50 meter (165 foot) range, 300 meter (984 foot) depth rating, and an open-source software interface that makes it a capable tool for ROV navigation and underwater acoustic imaging.

The Ping360 comes with everything needed for use on the BlueROV2.

Note: The Ping360 scanning sonar is currently in beta. It’s well-tested and we are confident in the hardware design, but we intend to improve the features and performance with software updates in the near future.

The Ping360 scanning sonar is a mechanical scanning imaging sonar. It’s designed primarily to be used on the BlueROV2 and other ROVs for navigation in low-visibility water conditions, but it’s also suited for applications such as inspection, obstacle avoidance, target location and tracking, autonomous systems development, and more!

What is a Scanning Sonar?

If you’re new to scanning sonars, here’s how it works: inside the Ping360 is an acoustic transducer that sends a narrow beam of acoustic energy into the water and then listens back for echoes. That transducer is mounted to a motor that rotates it in one degree increments and as it does this it generates a circular image of the sonar’s surroundings with a maximum range of 50 meters (165 feet). The result is similar to what you might see from a weather radar on the local news or a laser scanner on an autonomous robot.

When mounted on an ROV, the scanning sonar gives you a top-down view of the ROV’s surroundings. You can see echoes from objects like ropes, walls, dock pilings, rocks, shipwrecks, boats, fish, and any other structures or objects that reflect sound waves. With that, you have reference points to navigate from, regardless of water visibility, and you can locate important features in the water quickly.

The Ping360 is designed with an oil-filled section at the top that houses the acoustic transducer and an air-filled section at the bottom. It has an anodized aluminum case and a 1 meter (3.3 foot) cable with a pre-installed cable penetrator. It’s rated to a maximum depth of 300 meters (984 feet). The bottom has four M3 mounting holes and interfaces with an included bracket that makes it easy to install on the BlueROV2 and in other applications.

The sonar operates at an acoustic frequency of 750 kHz and has a beam width of 2 degrees horizontally and 25 degrees vertically. Electrically, it can be powered from any clean 11-25 V power source and it communicates via USB, RS485, or Ethernet.

The Ping360 connects to the open source Ping-Viewer application for control and data display. Ping-Viewer runs on Windows, Mac, and Linux and can connect to the Ping360 through a direct connection to the computer or through the Companion web interface on the BlueROV2.

For those who wish to integrate the Ping360 scanning sonar into other systems and access the data directly, it communicates with a binary message format called the Ping-Protocol. We’ve have Arduino and Python libraries for the Ping-Protocol to get you up and running almost immediately. 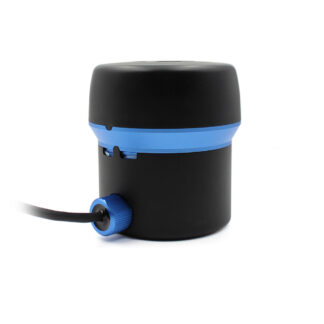